Medical Waste’s Impact On The Environment

Overall, the medical industry has a significant impact on the environment. Reports place the U.S. healthcare system as contributing 9%-10% of National greenhouse gas emissions. This article will look at how health
care impacts the environment and ways it can reduce its footprint.

A variety of industries generate hazardous medical waste. They vary from hospitals and veterinary clinics to tattoo and body piercing parlors. Medical waste is defined as waste that is “generated as a result of patient diagnosis and/or treatment or the immunization of human beings or animals.”

There are various stages of Regulated Medical Waste. Depending on the stage, different federal agencies impose requirements. However the bulk of RMW is controlled at the state level.

At the federal level, the Occupational Safety and Health Administration (OSHA), Department of Transport (DOT), and the Environmental Protection Agency (EPA) have certain requirements as to the storage, transportation, and emissions allowed. At the state level, regulations vary from state to state from quite strict to very little legislation.

If you generate medical waste at all, it is extremely important to check up on all the requirements, including possible local government rules, to ensure you are not leaving yourself open to severe fines.

Please refer to our guide The Basics of Medical Waste and Disposal for more information.

How Medical Waste Impacts the Environment

There are a host of reports and studies linking the U.S. healthcare system to emitting incredible amounts of greenhouse gas emissions (GHGs). A report from the Yale School of Medicine, published by the American Journal of Public Health, concluded that “the fundamental tenet of health care practice is ‘Do no harm,’ but ironically, the practice of health care itself causes significant pollution, and, consequently, indirect adverse effects on public health.”

The New England Journal of Medicine says the U.S. healthcare sector “accounts for nearly 1/10th of U.S. greenhouse gas emissions and reportedly would rank seventh in the quantity of such emissions internationally if it were its own country”.

In 2018, 19 major health organizations voluntarily committed to meeting the goals of the Paris Agreement, which is an international agreement whereby each country “determines, plans, and regularly reports on the contribution it undertakes to mitigate global warming”.

As of the writing of this article, that number grew to 28 organizations that include: Kaiser Permanente, Mercy Health, Boston Medical Center, Sutter Health, and Hackensack Meridian Health.

But how does medical waste specifically impact the environment?

Carbon emissions are primarily released by either incineration or through the transportation of medical waste from the site of generation (doctor’s office, clinic, etc.) to a treatment facility, and then to a landfill.

Due to the EPA’s rigorous emission standards on incineration since 1997, the number of incinerators has significantly fallen. At their height in the 1990s, there were over 180 incinerators in the U.S. Today there are around 72 commercial incinerators.

Incinerators operating in the U.S. are monitored by the EPA. Their efforts have resulted in a significant reduction in the emissions that result from incinerators.

Transportation of medical waste, however, has not seen such a reduction.

For those medical waste generators looking to reduce their carbon footprint, a good first step is reducing the excessive transportation that is occurring with third-party haulers.

Why Medical Practices Should Care

Even if being environmentally sustainable isn’t a personal priority for you, it is important to understand that people are increasingly seeking to do business with companies that are treating it as a priority. Global warming and the harmful effects of emissions on human health is covered daily in news outlets. More and more consumers (and patients) are actively searching for businesses that are employing green practices.

Additionally, the growing consumer market is made up of millenials who have long been trending toward green companies. According to a Gallup poll: “…70% of Americans age 18 to 34 worry about global warming…This compares with 62% of those 35 to 54 and 56% who are 55 or older.”

Making decisions that are more environmentally conscious, like cutting down on carbon emissions and communicating this as a part of your brand, will appeal to a lot of consumers. This can add to your credibility and give you a competitive edge.

It can save you money

​In some cases, going green can save your business money. Forbes notes that businesses often save money by going green as “Setting targets to cut emissions often reduces costs because it forces your business to make its operations and production more efficient.”

​By going green, you have an easy marketing message to communicate to the growing number of environmentally conscious consumers. It doesn’t even cost a lot of money to advertise what green practices you are using to them. You can start by mentioning this on your website and through newsletters emailed to patients. 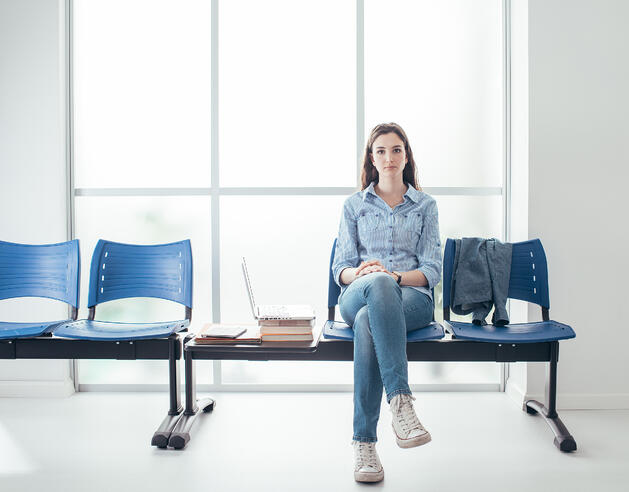 You can apply for local business awards that celebrate green practices and participate in local events that promote sustainable businesses. Any award successes and/or participation in green events is easily advertised to your patients and online.

There are some indirect benefits as well. Along with improving your practice’s public image by taking action on environmental issues, that action can also improve employee morale and in some cases, improve immediate safety. An example of the latter would be employing a process that reduces the amount of medical waste stored at your facility, which can cut down on potential contamination incidents and needlestick injuries.

How To Calculate Medical Waste Emissions

You then need to ask your hauler questions about their routes to calculate the amount of emissions generated by transportation.

Things to ask include:

To calculate the emissions created as a result of the medical waste you generate, you’ll need to analyze the full cycle of your current collection, treatment, and disposal. If you are using a third-party hauler, you will need to establish the average pickups you have a year.

You can also do a quick estimate using OnSite’s simple Carbon Footprint Calculator!

Staff training and accountability measures can make a big improvement. Create an action plan on how you will train and encourage them to help ensure there will be an improvement.

Some tips to help staff reach targets include:

The overall goal is to make a difference in the amount of emissions you produce.

Your targets may change as you evaluate things over time. Nonetheless, the important thing to remember is that you will be making a quantifiable difference by making an action plan and committing to monitoring things regularly.

This endeavor does not have to take up huge amounts of time. It only requires an action plan and consistent effort.

Once you know how much carbon emission you are producing, you can set goals on reducing that amount. This is a task of diligence. You will need to consistently monitor your emissions quarterly or bi-annually to see if you are hitting targets; and to establish if your targets are realistic.

How to Have a Positive Impact

There are two key ways you can cut down on the emissions produced from your medical waste:

Once you have established what your current emissions are through your third party hauler service, you will have some leverage in shopping around. You can now compare the transportation routes and frequency of pickups to other third party haulers to select a service that will result in less emissions.

Another path to medical waste reduction that is often overlooked is ensuring medical staff is segregating waste properly. Hundreds of pounds of trash a year could be mistakenly (or negligently) placed in medical waste bins, adding to the number of pickups required by third party haulers. Items like medical gloves, labels, and even food stuffs that end up in red bags instead of regular office bins is a common occurrence.

It should also be noted that this issue is a big money waster for practices as it is MUCH more expensive to dispose of medical waste than regular municipal trash.

A final way to reduce the amount of medical waste generated is through sustainable purchasing. As found in a carbon footprint study at a large U.S. hospital that trialed reusable sharps containers:

Selecting an on-premise treatment and disposal option that allows a practice to treat waste at the practice, and then dispose of the remains into the regular office trash, immediately cuts down on emissions. It cuts down on having a third party truck come collect that part of the practice’s waste, then taking that waste to a treatment facility, and then having that further transported to a landfill.

You can also look at other means for treating and disposing of medical waste. There are on-premise solutions, such as the one pictured, that easily allow small quantity generators (SQGs) to treat their medical waste onsite and then dispose of the sterilized remains with the regular trash

There are other issues beyond cutting down on carbon emissions that an on-premise solution solves, such as reducing risk. Many issues can arise after your medical waste is picked up from your site, and you are still legally liable. If you are choosing to trust your cradle to grave liability with an off-site hauler, be sure to conduct regular audits of that vendor’s processes, including treatment facility assessments, and a visit to their place of final disposal. (For more information, please see our post Who Can Sue You for Improper Medical Waste Handling and Disposal.

Additionally, an on-premise solution can help prove you are keeping up with technologies as required by OSHA’s Exposure Control Plan. A key component of OSHA’s plan is the review processes section, which requires that you prove that you are keeping up with new technologies that help keep staff safe. An on-premise solution allows you to deal with medical waste daily, with no requirement for storing large amounts until a scheduled pickup. This can help reduce contamination issues and potential needle stick injuries.

OnSite Waste Technologies has developed an innovative desktop-sized processing unit that converts regulated medical waste into sterile garbage that can be placed in a practice’s regular trash. Their solution drastically reduces the amount of carbon emissions associated with the traditional method of hauling waste to a central location.

An example of how much emissions can be cut with this solution can be seen in the graph below.

The graph shows the CO2 saved for the top 7 and bottom 7 states in the U.S. Vermont has super clean electrical power, so the electricity the TE-5000 uses costs very little in CO2. Wyoming has less clean methods of producing electricity, so the savings is less, but still a savings. The cost of haul-away is the same for every state.

To learn more about OnSite’s treatment solution and compliance training, click on the button below!